You can see in the graphic below that bologna is not the most popular type of lunch meat. Turkey, ham, roast beef, and chicken greatly outsell it. However, that doesn’t mean that this cold cut can’t still be enjoyed by many. Here are 15 bologna brands that are worth a try for your next sandwich or sub. 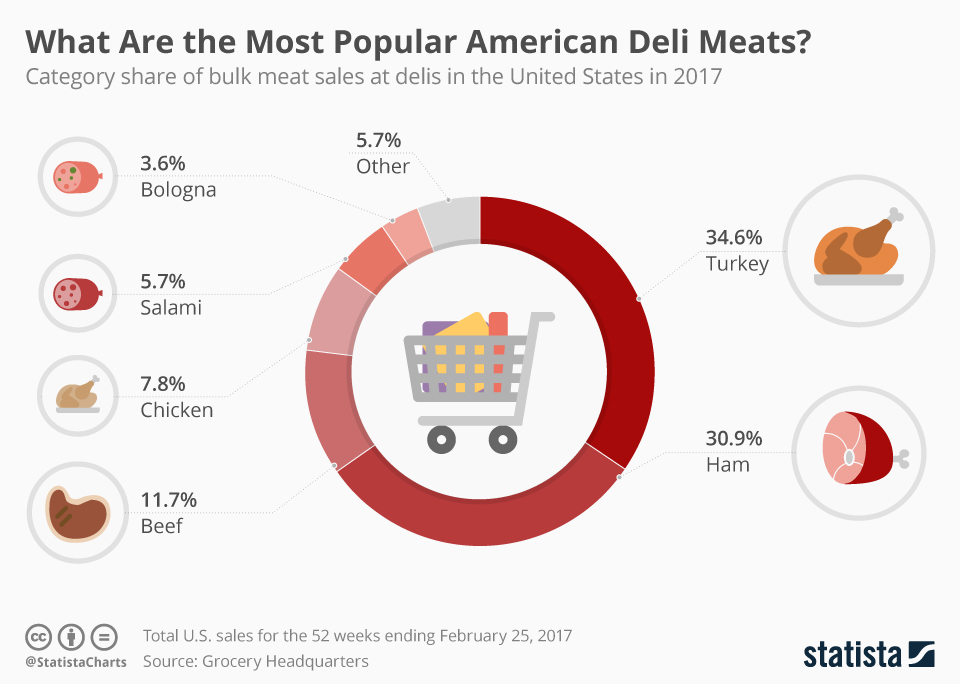 You will find more infographics at Statista

Bar-S is owned by Sigma Alimentos, a large Mexican food processing and distribution business. The “S” in Bar-S stands for Seattle, which is where the brand originated. While the brand’s roots come from Seattle, operation and distribution are in Oklahoma. In 2020, the company celebrated its 15 anniversary of being the top-selling hot dog brand in the U.S. based on volume sold.

Boar’s Head has been distributing cold cuts since 1905. The company was located in Brooklyn since the beginning before moving its headquarters to Sarasota, Flordia in 2001. Boar’s Head is a family-owned business that is committed to offering premium deli products.

Here are the bologna meats made by Boar’s Head:

Butterball is famous for its turkeys. It is the largest producer of turkey products in the United States. Frankly, it’s hard not to think about Butterball when thinking of store-bought turkeys. They even have their own turkey talk line to assist customers in preparing their turkey.

The above being said, you can probably guess the type of bologna that is made by Butterball. That’s right – it’s Turkey Bologna. It comes in 12 oz. and 16 oz. sizes in pre-packaged slices.

Gottlieb Dietz founded the company in 1939 when he purchased a meat company owned by Walter Watson. The company is now on the 4th generation of family ownership. They specialize in making deli meats, cheeses, jerky, mustard, pickles, and more.

These are the bologna products made by Dietz & Watson:

Here are some of Eckrich’s more popular bologna products:

Field Meats was started in 1914 when Charles Field launched the Field brand in Owensboro, Kentucky. Today, the company is owned by Specialty Foods Group which produces premium and private label meats such as ham, hot dogs, bacon, turkey, and lunchmeats. It owns not only the Field brand but also Mickelberry’s, Scoot Pete, Kentucky Legend, and Fischer’s.

Similar to Field Meats, Fischer’s began in Kentucky and is currently owned by Specialty Foods Group. The company was started in 1904 by Henry Fischer as a meat packing facility. Today, its meats are still made with old-school recipes and techniques that are proven to produce tasty meats.

These are the bologna products that Fischer’s makes:

Similar to Eckrich, Gwaltney is owned by Smithfield Foods. Gwaltney was one of the initial growth acquistion of Smithfield that began in 1981. Following this acquisition, Smithfield went on to acquire a whole slew of businesses including Eckrich, John Morrell, and Farmland Foods.

Hebrew National is primarily known for its kosher hot dogs. The company is over 115 years old with its roots coming from Manhattan’s Jewish community. See our article titled Nathan’s vs Hebrew National for more details on the brand.

Koegel’s is headquartered in Flint, Michigan, and has been around since 1916 when Albert Koegel opened his meat company. During the 1930s, the company was able to construct its own plant to make meat products. This is primarily a Michigan and Northern Ohio brand today. It makes 35 products, one of which is bologna.

Christian Kunzler was a German butcher who came to the United States and opened his meat company in 1901. The company still resides in Lancaster, Pennsylvania like it has since its beginning. Today, Kunzler makes over 500 meat products including bacon, deli meats, ham, franks, and specialty items.

Oscar Mayer is certainly one of the most recognized names when it comes to bologna. The company was founded in 1883 in Chicago by Oscar and Gottfried Mayer. The business was privately owned up until General Foods purchased the company in 1981.

Today, it’s a brand of the giant food and beverage conglomerate, Kraft Heinz. The company makes cold cuts, hot dogs, bacon, sausage, and frozen snacks such as corn dogs. Its bologna products that are perfect on a favorite white bread brand of your choice are:

Scott Pete is best known for its sausage which it has been making since 1926. This Chicago company also makes hot dogs, lunch meat, Braunschweiger, and bologna. Its bologna includes the following products:

Harvey Seltzer was a pioneer in creating Lebanon Bologna using hardwood smoking, a delicious spice blend, and 100% beef. He developed his process in the early 1900s and many of his techniques are still used today. Seltzer’s bologna meats continue to be naturally hardwood smoked and made from all beef. Here are its bologna products:

This is the bologna brand of Tyson Foods. The company makes German-style bologna using beef and a tasty blend of spices. The recipes haven’t changed since 1972. Why stop what’s working? This is one of the top grocery deli brands where it’s sold.

These are the products made by Wunderbar:

Do you know of a bologna brand that deserves to be featured here? Contact us and we will consider adding it above. Thank you!